For the first time ever, a fishery and its associated fishmeal and fish oil production sites have gained approval and certification following their journey on the MarinTrust Improver Programme 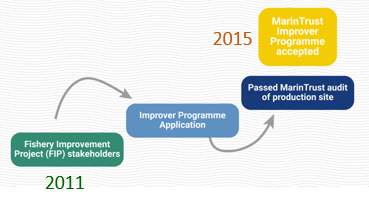 Several years after the Panama small pelagics fishery was accepted onto the MarinTrust Improver Programme (IP), the fishmeal and fish oil production plants sourcing from it have demonstrated full compliance and just gained MarinTrust certification.

Some of the main improvements made in this fishery include a new management plan and the setting of Total Allowable Catches. An onboard observer programme was also initiated which enabled the collection of information on the size and maturity of the target species and the ecosystem impacts on endangered species. As a result of the findings of the observers’ programme, fishermen are regularly trained to release vulnerable species alive.

“Back in the 2010s, the Panama small pelagics fishery was data poor, with inadequate records of effort or landings, and nothing known about its impacts on the ecosystem. The market had started demanding third party proof of sustainability, so something needed to be done” explains Ernesto Godelman, Executive director of CeDePesca, the non-profit organisation which initiated the project.

The process leading to the certification being granted involves the fishery passing the full MarinTrust fishery assessment and the site passing a third-party audit by a certification body. “This thorough process ensures not only that marine ingredients come from non-IUU fisheries that are managed in accordance with the FAO Code of Conduct for Responsible Fisheries but also that production is carried out to high standards of safety and quality, with sufficient care given to the environment, workforce, and local community” says Nicola Clark, Impacts Manager at MarinTrust.

Animalfeeds has been involved in marketing Panamanian fishmeal and fish oil since 1965. Brian Murtagh, Managing Director, and also leader of the Fishery Improvement Project, explains: “The fishery mainly targets Pacific anchovy and Pacific thread herring. Today, Europe buys the majority of the fish oil for use in the salmon feed industry, while China, North America and countries neighbouring Panama are the main market for fishmeal, which is used in swine, aquaculture and petfood diets”.

The Fishery Improvement Project (FIP) for the Panama small pelagics fishery was started in 2011 as an initiative of CeDePesca, a non-profit organisation founded in 1997, to help Latin American fisheries become sustainable, along with Promarina SA, the most important local producer. It is now run in conjunction with Procesadora Bayano SA (Probasa). It was the first FIP to be accepted onto the MarinTrust Improver Programme.

Flor Torrijos, General Administrator at Panama’s ARAP (Autoridad de los Recursos Acuaticos y Pesqueros- Fishery and Aquatic Resources Authority) concludes: “This recognition is the result of more than seven years of hard work in the fishing sector and an indication that our nation guarantees good practices in the industry, consolidating investments that focus their strengths on consistent improvements, in the short and medium term, aligned with the interests of conscientious consumers committed to nature around the world. This achievement that we obtain today goes hand in hand with the regulations that promote the protection of marine species, in balance with sustainable fishing activity that generates wealth, employment and a secure source of food. Panama demonstrates that it adapts to the demands of the 21st century’s society, adopts legislation that promotes the protection of marine resources and ensures compliance.”

A ceremony took place on Thursday 20th October 2022 at Foreign Ministry of the Republic of Panama. MarinTrust Executive Chair Libby Woodhatch, thanked all the individuals and companies who dedicated time and efforts to make this happen: "Autoridad de los Recursos Acutáicos de Panaman (ARAP), CeDePesca (Ernesto Godelman and his team), Promarina SA, Procesadora Bayano SA (Probasa). And of course, to Brian Murtagh from Animalfeeds Inc who co-ordinated the MarinTrust Improver Programme for the fishery."

More information on the MarinTrust Improver Programme can be found here